Community 2018 was totally buzzing! It was a day of massive singalongs, big chants and watching the hottest new bands with your bezzie mates in the sunshine in Finsbury Park.

From The Van T’s kicking it all off with the first mosh of the day to Two Door Cinema Club’s amaze fireworks, get gassed all over again with our Community ’18 review.

Scottish grungers The Van T’s open the N4 Stage with riffs meatier than a Gregg’s steak bake and sisterly harmonies that’d make Haim weep. The band launch into ultimate break-up track ‘Blood Orange’ from their ‘Coming Of Age’ EP and despite the fierce rays the mosh goes off.

Twin sisters Chloe and Hannah hype up the summer vibes with the sunshine swirling guitar riffs of ‘Better Now’. Whilst, the Cali surf punk of ‘Laguna Babe’ make us think we’re on Venice beach posting insta stories of our hotdog legs. We may have sweated off all our factor 50 and lost a couple of face gems, but The Van T’s are a band worth getting hot and bothered for.

Whilst The Van T’s are bringing the heat to the N4 stage, Belako are bringing both the moves and the feels to the Main Stage. Single ‘Sea Of Confusion’ from their debut album ‘Eurie’ has all the sadness of a Love Island uncoupling, but you can’t help but jump around to the outro “LA LA LA LAs”. Ending  with the power punk madness of closer ‘Eat Me’, Belako make us want to take off the Community pass from around our waist and swing it round our heads.

When we grow up we want/need to be the Marmozets’ singer as under ‘cool’ in the dictionary, Becca MacIntyre’s picture is next to it. Right from the opening shouts of “1,2,3 PLAY!’ the band have more bounce than a turbo sized energy drink.

The crowd are loving it chanting ‘MARMOZETS’ in the breaks and the band respond with the drummer blowing kisses back. Certified banger ‘Major System Error’ sees the first circle mosh pit of the day and closes the set with a huge scream from the crowd. 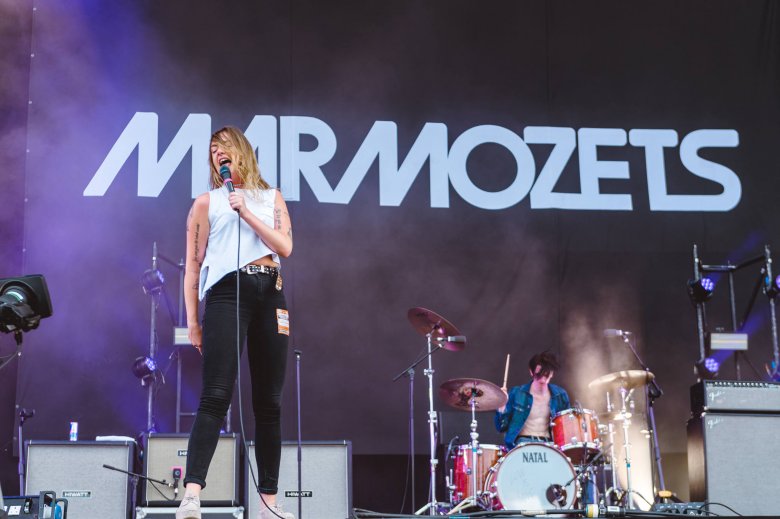 A Sundara Karma show is like tasting the rainbow without having to reach for a bag of Skittles. After bewitching us all with ‘Loveblood’, singer Oscar tells us “we have songs for you to sway and sing to” and he ain’t wrong as they launch into the soaring pop psych of ‘Olympia’. The Reading quartet also treat us to new song ‘One Last Night On This Earth, which with a banging beat is pure glittery disco.

‘She Said’ gets one of the biggest singalongs of the day and Oscar makes the crowd scream even more when he tells us that they’re heading back to the studio to record their second album. Finishing up with ‘Explore’, Sundara Karma are so good we’re already booking in for THAT fringe trim. 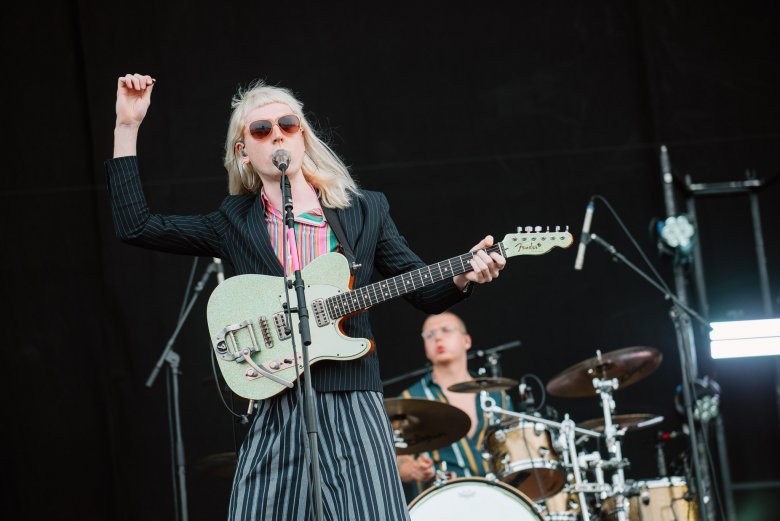 RAT BOY aka Jordan Candy may have lost of his guitars on his flight to London, but this Essex boy is still going to pull a blinder of a set. It’s nearly hitting 30c degrees, but that’s not going to stop us moshing to the thrash punk of ‘KNOCK KNOCK KNOCK’ and  ‘SCUM’. The chilled soul of ‘GET OVER IT’’ is perfect for today’s summer vibes and ‘MOVE has everyone from the front to the back jumping.

It’s all about the chants today and RAT BOY is no different as he sees which side of the crowd can chant “FOOTBALL!’ the loudest.  We don’t want it to end but RAT BOY brings it all back home with a totally lit version of ‘LEFT 4 DEAD’.

Everything YUNGBLUD writes is so relatable it’s like it’s come straight from your own head. The crowd lets out their inner rebel and screams and moshes along to the big beats of ‘21st Century Liability’ and ‘California’. Telling us, “this my last song, let’s f**king we lost it”, bumbags, sunglasses and glitter go flying as YUNGBLUD plays the raw ‘Tin Pan Boy’ with him finishing it by throwing his guitar into the drum kit and leaping into the crowd. Before leaving he says,  “I’ll be hanging out to make friends, come say ‘hello’” – we can’t wait to be bezzies. 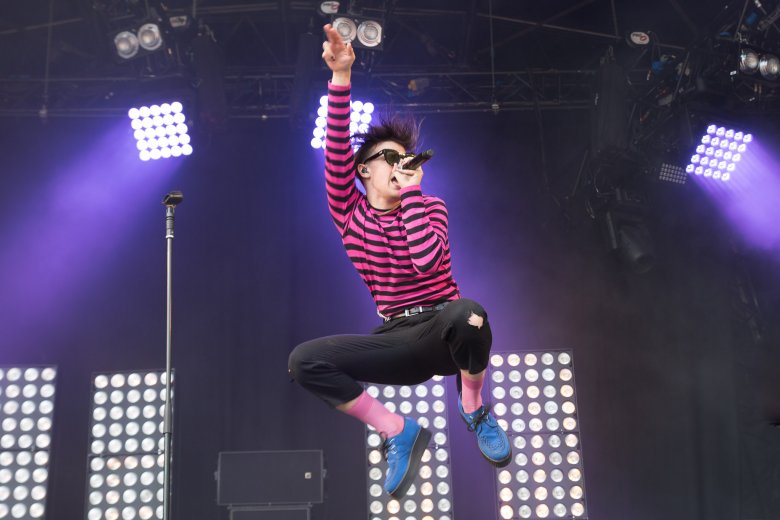 It’s 4.45pm, we’ve bounced, moshed, danced and sang and are ready for a nap under the tree, but Circa Waves aren’t going to have any of that. Opening with ‘Wake Up’ it does exactly what it says as we all bounce into action with another massive mosh pit. The Liverpool lads keep it coming, dishing out hits ‘Get Away’, ‘Stuck’ and ‘Young Chasers’ from their brilliant debut album of the same name.

Singer Keiran gets everyone on side when he tells us to “make Harry Kane proud” before playing ‘Goodbye”. Keiran says “this song was invented for right now!” and everyone knows what’s coming as the band close with certified summer banger ‘T-Shirt- Weather’ to close a sizzling set.

Can’t quite put into words how amazing yesterday was. I’ll just leave this here. @communityLDN pic.twitter.com/FSt0b7LbfL

You Me At Six

You Me At Six have the crowd in the palm of their hands even before strumming a note as they come out to the song everyone’s been chanting all day…the mighty ‘Three Lions’. The band bring the ROCK to the Main Stage as they hit it hard with anthems ‘Room To Breathe’, ‘Underdog’ and ‘Fast Forward’.

Josh Franceschi is one of the most energetic front people of the day as he runs around the stage like a man who’s scoffed ten packs of Haribo. He shouts “GO!GO!GO!” to get the crowd moshing more to the another made for Community anthem, “Reckless”; slipping in cheeky covers of The Killers ‘When We Were Young’ at the end. 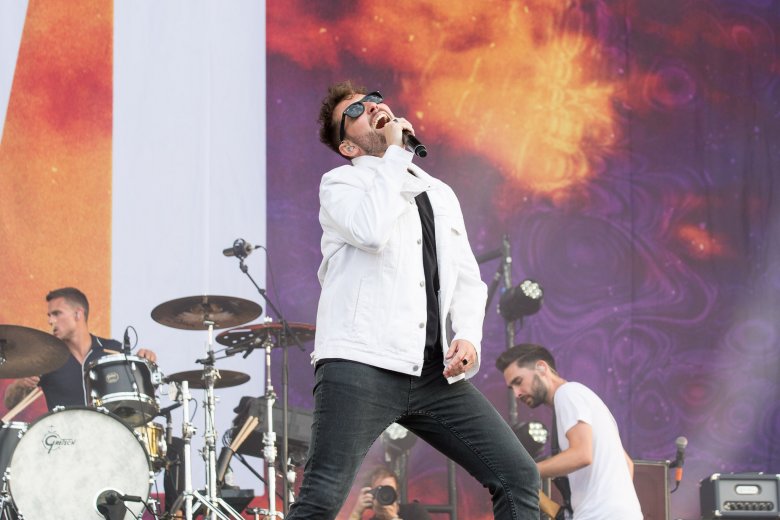 The Vaccines set is one to grab your mates for and sing the lyrics to ‘Wreckin Bar (Ra Ra Ra)’ in each other’s faces. Singer Justin Young  prowls the stage with an ice cold cool, as the band play ‘Your Love Is My Favourite Band’ and Vaccines’ classic ‘Post Break Up Sex’

New track ‘All My Friends’ has the straight-in Vaccines’ big chorus and is the song you need to listen to when your BFF temporarily ditches you for a new boyfriend or girlfriend. ‘I Can’t Quit’ ends the set with a massive “I’M OVER IT!” singalong.

Watch them again at Reading Festival and Leeds Festival. 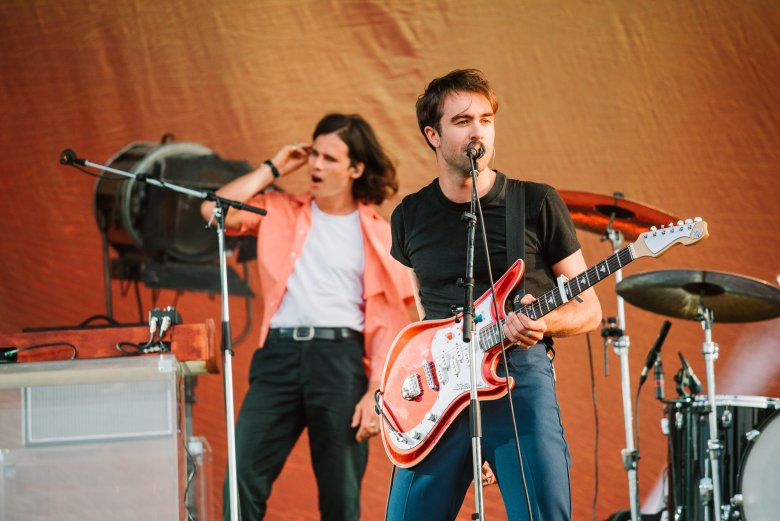 Tom Grennan goes all out on the N4 stage for his headline set with a full band including a brass section and backing singers. The hometown boy is the perfect pick as dusk falls with the sultry soul of ‘Royal Highness’ and ‘Praying’ with everyone swaying side to side.

With is shirt unbuttoned to the waist, Tom looks every bit the soul singer. On ‘Sober’ his vocals are even more richly raspy live and ‘I Might’ has us reaching for a hankie. Closing the set with massive tune, ‘Found What I’ve Been Looking For’, it’s clear tonight we really have.

Don’t miss Tom when he headlines the Festival Republic Stage at Reading Festival and Leeds Festival. 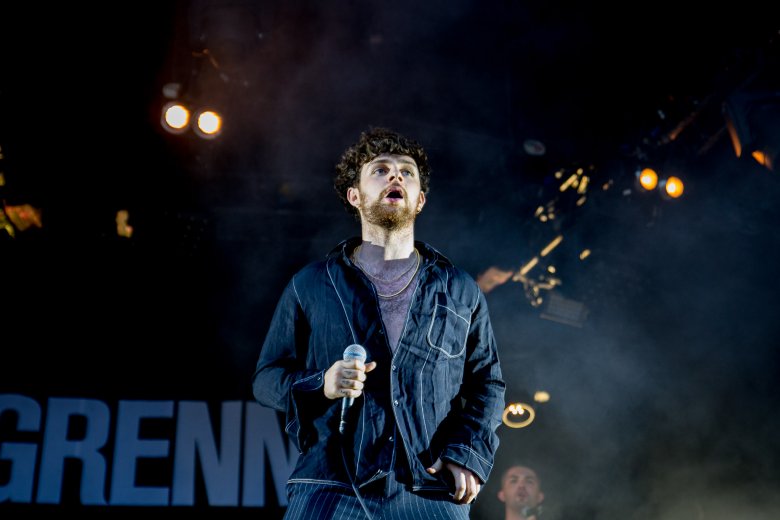 It’s the moment we’ve all been waiting for…TWO DOOR! Alex, Sam and Kevin kick things off with a bang, literally, as blue and white streamers are shot out from the stage as the band play classic track, ‘Undercover Martyn’. The fan favourites keep on coming as the band raid classic album ‘Tourist History’ playing ‘I Can Talk’, ‘This Is The Life’ and ‘Are We Ready? (Wreck)’ back to back leaving us hungry for more.

The stage looks immense as the massive grid behind the band glows pink and blue throughout the set. Looking like a futuristic cowboy in leather trousers and hat, Alex walks the stage with ease to get the crowd, who now have the streamers wrapped around their heads and as makeshift capes, singing along to the infectious chorus.

Alex introduces “oldie”, ‘Something Good Can Work’, before the band wrap up the set and the day with the aptly-titled, ‘Sun’. A technicolour shower of fireworks explode for the perfect final Snapchat moment and Community Festival 2018 goes down as a memory we’ll never forget.

Though, I’m far away, I know I’ll stay right there with you.

London, what can we say... yesterday was a big moment for us. Thank you! @communityLDN pic.twitter.com/hRtetLdTFU

Loved Community 2018? Get yourself to Community 2019 in Finsbury Park on 30th June 2019 to watch The Kooks, Blossoms, Don Broco, The Hunna, Kate Nash, Gerry Cinnamon and many more.

Tickets on sale now for just £40 plus booking fee.

Get your Community 2019 tickets!
See all news