Community 2019 was a total blast! Check out all of the reviews from the biggest indie party of the summer, including The Kooks, Blossoms, Don Broco, The Hunna, Kate Nash, Gerry Cinnamon and many more!

“We came all the way from Oakland, California to bring you a rock n roll show!!” shouts Cole Becker – and with that, SWMRS kick off Community ’19. Launching straight into ‘Trashbag Baby’, they have the crowd bouncing through the entire set. They artfully blend ‘Lose Lose Lose’ with the Nas x Billy Ray Cyrus hit ‘Old Town Road’, and, in another nod to the Cyrus family, ‘Miley’ sees arms waving and pits opening. What a way to start the biggest party of the summer. 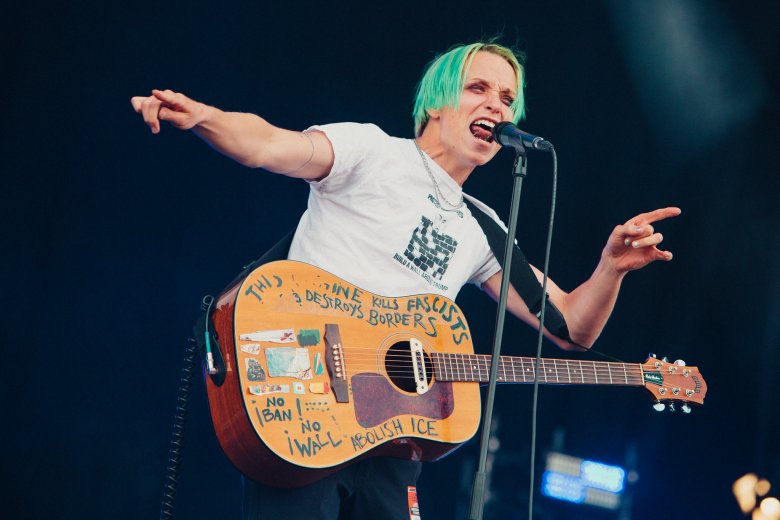 It's a scorcher! Make sure you wear plenty of sunscreen (available from the welfare tent for free) and drink plenty of water from the water points on site! pic.twitter.com/l71TyK1X9o

Over on the N4 Stage Lazy Day have has us easing into Sunday with their hazy grunge pop. With everyone sprawled out on the grass the north London quartet rip through the defiant melancholy of ‘Double-j’ and the swirling shimmer of ‘With My Mind’.

Front woman Tilly’s vocals move effortlessly between blissed out calm to rasped elation. A new song called ‘Real Feel’ due out later this summer has all the goosebump moments of early Maccabees mixed with a chunk of distortion. Lazy Day are the perfect way to start any Sunday. 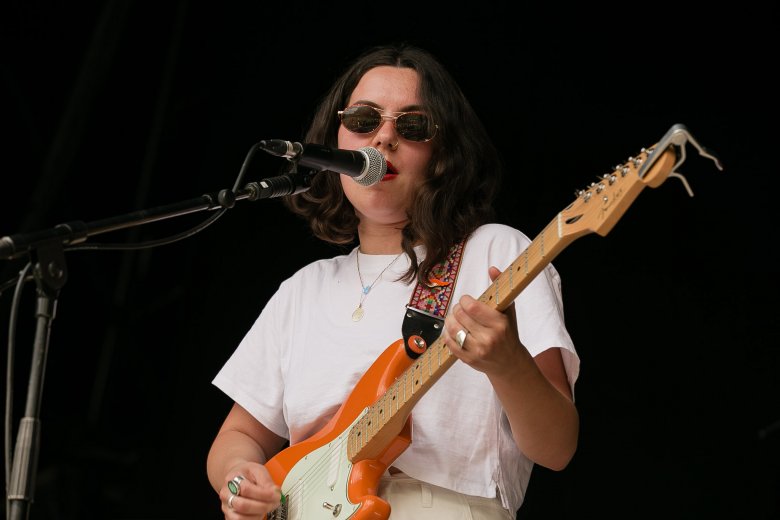 Time to wave your Scottish flags – Gerry Cinnamon has arrived to take us all to Discoland. Wearing a trademark jazzy jacket, he opens up with ‘Lullaby’, but don’t think you’ll be falling asleep any time soon, ’cause it’s an absolute foot stomper. The party really gets started with “Sometimes” and by the time the unmistakable opening bars of “Belter” kick in, the entire crowd is involved all the way back. All together now: na na na na na na na, GE-RRY CIN-NA-MON…

Today in Finny P everyone – from the front to back – is part of Kate Nash‘s girl gang. Kate and her band radiate feelgood vibes – ‘Mouthwash’ has us “singing uh oh on Friday night” and ‘Pumpkin Soup’ has us remembering that first love.

Kate in her sequin suit is every bit the superhero, leaping from the stage and spending most of the set deep in the front row. Telling us to raise our fingertips, she closes with indie classic ‘Foundations’, with the barrier holding her no more, she surfs out to be with the crowd. 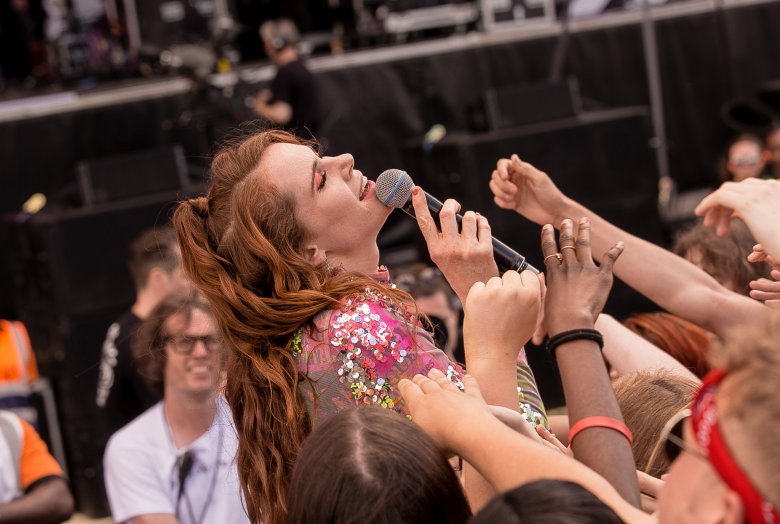 With the sun now shining brighter than Kate Nash’s sequins, it’s time for Bloxx over on the N4 Stage. Fusing fuzzy, grungy guitars with indie-pop melodies, they’re the perfect band for this sort of weather. Made-for-festivals banger ‘Coke’ goes down a treat with the crowd, with arms, pints, and beach balls all soaring through the air – but it’s the killer chorus of ‘Headspace’ that really gets a good old singalong going.

The Hunna run out onstage looking totally buzzed and the energy doesn’t drop for the entire set. It’s non stop anthems – ‘We Could Be’ has the crowd instantly singing along and, as heavy riffs of ‘Dare’ kick in, drinks and hands are shoot high in the air and never come down.

As the sun shines down, ‘Babe, Can I Call’ gives us all the feels as Ryan drops the chorus for everyone to sing along. Our thirst for new material is quenched as the the band drop new cut ‘I Get High To Forget” – a bonafide banger that has Finsbury Park bouncing hard.

The end of the set comes roaring to a close with one massive singalong as ‘She’s Casual’ is chased down by ‘Bonfire’. Before playing another new track, Ryan announces a brand new album is on the way soon and after today we cannot wait. 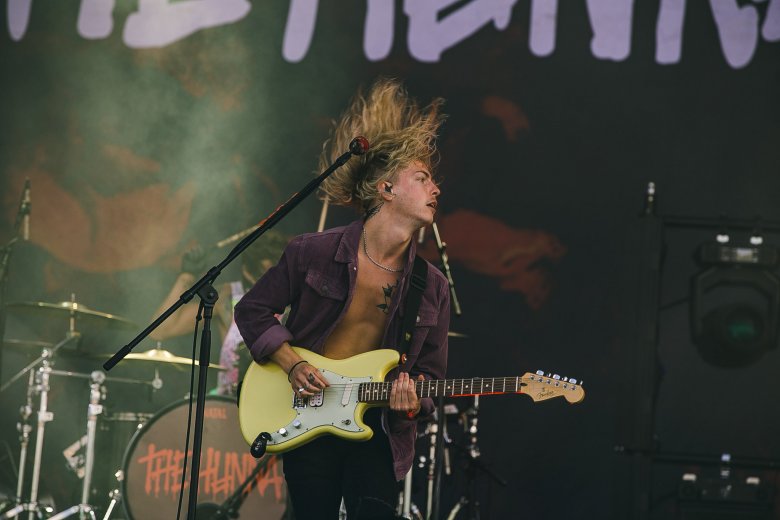 “8 DAYS A WEEK SUCKER, 8 DAYS A WEEK” – it can only be Bedford lads Don Broco here to get the place jumping. We mean that literally, as Rob Damiani demands the crowd do the classic crouch down during ‘Automatic’. He ends up diving into the crowd himself during ‘Everybody’, much to fans’ delight, whilst ‘Half Man Half God’ serves as the perfect head banger. By the end of it, we’re all euphorically swinging our shirts round our heads during ‘T-Shirt Song’. Epic. 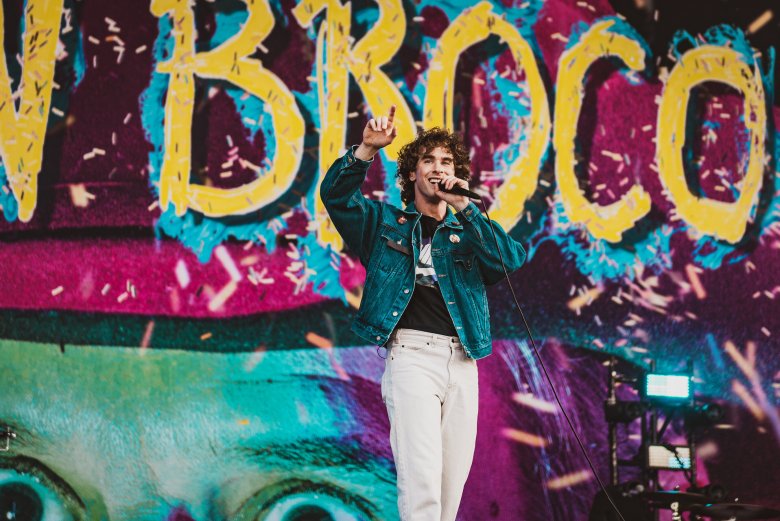 The sun is getting low, but we’re not slowing down just yet – because it’s time for your N4 Stage headliners, The Amazons. It’s a full pelt rock and roll show as suited and booted frontman Matt Thomson leads the crowd in singalongs to ‘Mother’, ‘Little Something’ and ’25’.

It’s a sea of arms in the air during ‘Helter Skelter’, with the crowd bellowing along with Matt before drummer Joe Emmett busts out a solo that could be mistaken for an earthquake. As golden hour sets in, new single ‘Doubt It’ soars, before THAT intro kicks in, signalling an immense finale – it can only be ‘Black Magic’. What a way to close the stage. 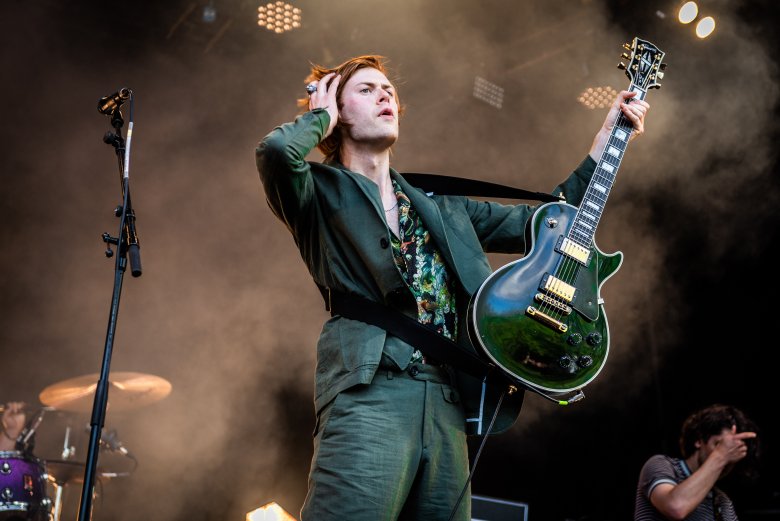 For indie bops with all the feels, you know there’s only one place to look – Blossoms.

Coming onstage to the swaggering beats of Kanye’s ‘Black Skinhead’, and dressed fresh from ’70s – the Stockport lads show they’re about to lay claim to Finny P. ‘At Most A Kiss’ kicks it off and the band don’t let the us catch our breath hitting out ‘I Can’t Stand It’, ‘Cool Like You’ and ‘Honey Sweet’ back to back.

Front man Tom is the epitome of understated cool – whether’s he’s strumming on a guitar or leaning with magnetic intent on the speakers – he’s in total control of the crowd. For ‘There’s A Reason Why (I Never Returned Your Calls)’ he barely utters a word before we instantly sing it back for him.

Can Blossoms beat Gerry Cinnamon for the singalong of the day? They come close with new track ‘Girlfriend’ and the euphoria of ‘Getaway’, but it’s as the opening chords of last song ‘Charlemagne’ ring out and the crowd explode that they seal it. Gerry, there’s a new Sheriff in town. 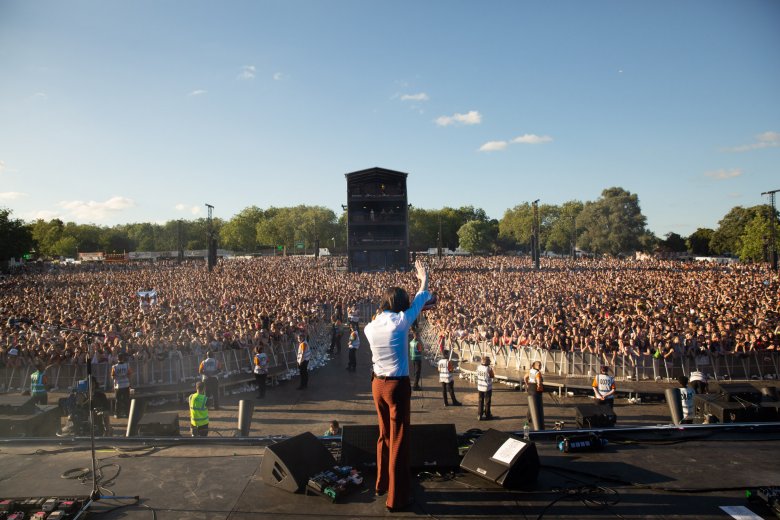 We’ve moshed, we’ve screamed our lungs out and swung our t-shirts round our heads, but we’re not done yet as the show we’ve all be waiting for is finally here – THE KOOKS!

Absolute classic ‘Always Where I Need To Be’ starts the set and – as we shout out “I just don’t care!” with front man Luke – we know it’s going to be non-stop indie bangers from here on in. The band quickly throwback to their classic debut album, ‘Inside In/Inside Out’, for delicious bops of ‘Sofa Song’, ‘Eddie’s Gun’ and ‘She Moves In Her Own Way’ and all of Finny P is bouncing.

The sun may be setting in the sky, but Luke isn’t ever going to let us down. After everyone sings their heart out to ‘Ooh La’, Luke gets us to give more, saying ‘you guys are crazy, where are my dancers let’s have a little boogie” – before launching into the disco funk of ‘Westside’.

Tender moments come when Luke takes to the piano to play the touching. ‘See Me Now’, and the country-tinged ‘Weight Of The World’ which has all of Finny P swaying. Describing the show earlier as a “homecoming”, Luke films the crowd with a vintage camera before ‘Forgive and ‘Forget’ to savour the moment.

We don’t want it to end, but the set draws to a close with Luke, armed just with an acoustic guitar, singing ‘Seaside’ along with the crowd, before the band come back for ‘Junk Of The Heart’.

Thankfully it’s not over yet as the band come back for another arms-in-the-air moment for ‘Pressure’. As confetti showers the crowd, the iconic strummed chords of ‘Naive’ close an unforgettable headline set. Welcome home, The Kooks. 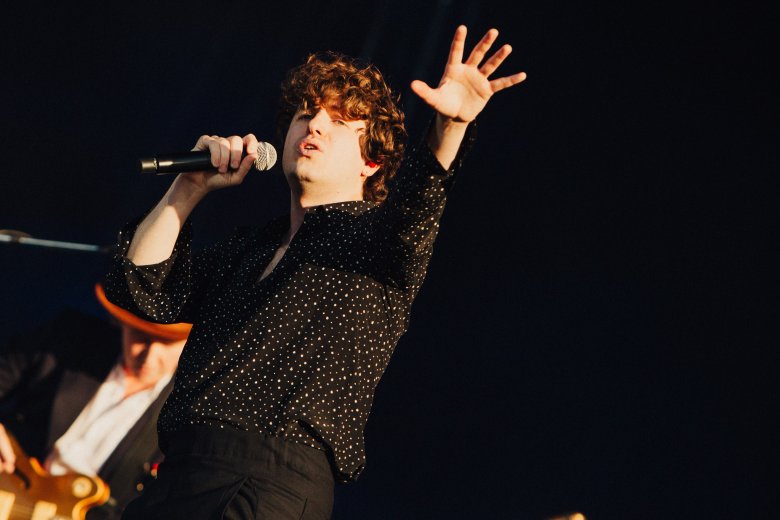 Thank you #CommunityLDNers! Stay safe and look after each other, see you next year! pic.twitter.com/X5buiy6Kan