THE WOMBATS, NOTHING BUT THIEVES

PLUS MORE ACTS ACROSS TWO STAGES TO BE ANNOUNCED

Community, London’s ultimate one day indie-rock festival returns to Finsbury Park on Saturday 16 July. 45,000 music fans are set for a huge sunshine celebration in the Capital, headlined by Two Door Cinema Club joined by The Wombats, Nothing but Thieves, Circa Waves, Pale Waves and more exciting acts across two stages at one of London’s most loved outdoor venues. The highlight of the summer is back with tickets on sale from 09:00AM on Friday 25 Feb.

Two Door Cinema Club have captured teenage hearts and minds with catchy riffs and propulsive hooks since their acclaimed multi-platinum debut LP, ‘Tourist History’ cemented their presence as stalwarts in the British Indie scene. The Northern Irish three piece continue to evolve and shape the future of British indie with their wonderfully expansive sound, as seen in their most recent and third UK Top 5 hit album, ‘False Alarm’, maintaining their status as one of the UK’s most exciting live bands with a trick bag of anthems.

Two Door Cinema club said: “We’re so happy to be headlining Community Festival! It’s been a rough couple of years for live music so we’re very excited to get back to doing what we do best. The lineup is fantastic and we can’t wait to see some of the best established and newest bands.”

Dynamic rock band Nothing But Thieves who have been packing out arenas with their mesmerising ‘Moral Panic’ live show and will hit the main stage said: “Hometown festival here we go.  We loved our last outing at Community Fest and it’s about time we finally bring Moral Panic to a London field. Roll up, play a gig, enjoy the festival, stumble home. See ya there.”

Also joining the bill are fan favourites The Wombats having recently scored their first number 1 album with ‘Fix Yourself, Not The World’, Circa Waves who will bring the ‘T-Shirt Weather’ and indie pop-punk darlings Pale Waves. A host of exciting acts are also set to appear across the two stages including Abby Roberts, Alfie Templeman, Bears in Trees, Big Image, Courting, Crawlers, Daisy Brain, Just Wondering, Kid Brunswick, Molly Burman, Police Car Collective, Priestgate and The Let Go with more to be announced, all ready to welcome fans back to the Community with open arms once more. 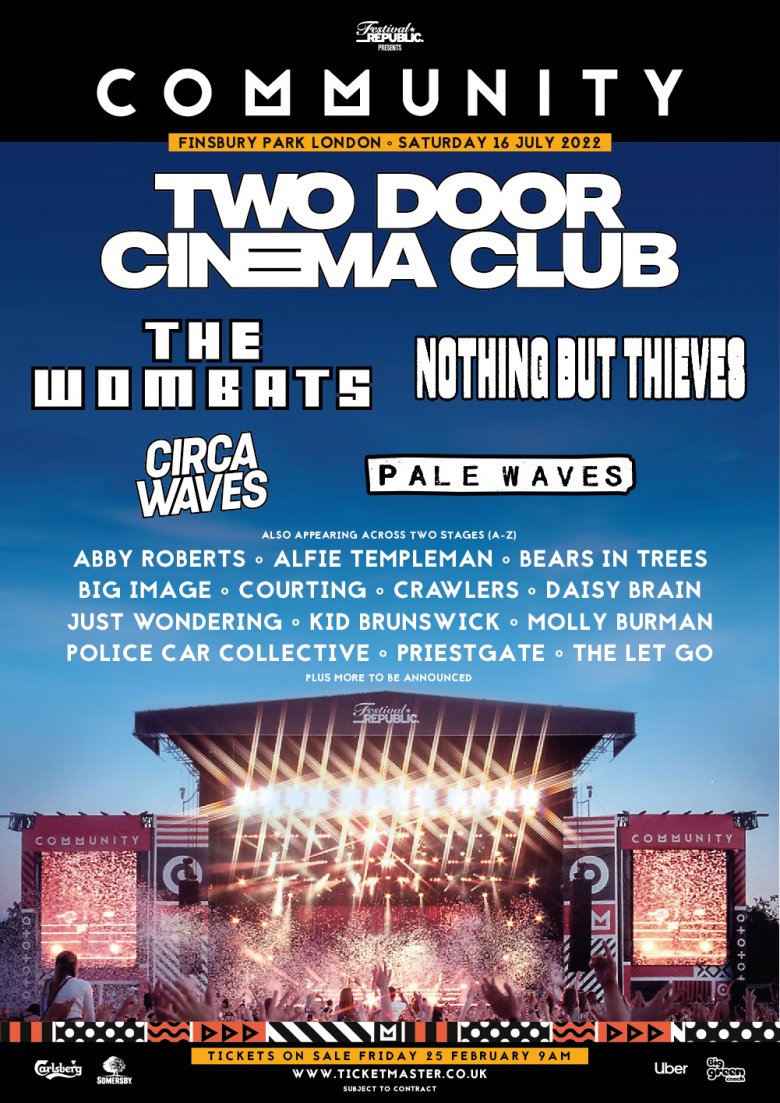